You are here: Home / Cooking / Maine Lobster vs Canadian Lobster (What You Need To Know)

Did you know that the world’s best lobsters come from the coast of Maine? It’s the most popular for producing some of the tastiest and even the largest crustaceans. Then comes Canadian lobsters from the Northern seas. Even they’re no different from their fellow Maine inhabitants. In that case, here’s the ultimate comparison of Maine Lobster vs Canadian Lobster.

The thing is I would like to get into the depth of this particular topic. Due to this, I’m going to talk about some very important details. That is related to Maine lobsters and Canadian lobsters, obviously. But also to lobsters in general. It’s better if you know what they are, what they taste like, how they differ from crabs and crayfish, etc.

So let’s get started right away!

The term “lobsters” is loosely used for describing or referring to a range of marine crustaceans. In America, most people talking about lobsters are actually talking about Nephropidae. These are lobsters from North Atlantic that, when you boil them, turn bright red in color. 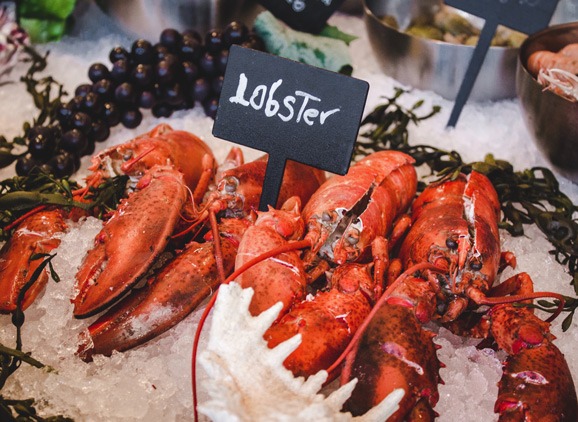 How Many Legs Does A Lobster Have?

You already know that we humans have 2 legs. As for cats and dogs, they have 4 legs. Spiders have as many as 8 legs. So what’s the number for lobsters? Lobsters have 10 legs, and not 8 as the popular myth goes.

There’s no shortage of unrealistic portrayals when it comes to lobsters. Be it stuffed animals, sidewalk art, and even cartoon characters. They all have 8 legs when in reality lobsters have 10 of them. 4 pairs of small legs and 2 claws in the front.

The taste can be described in many different ways. But whatever angle you choose here, there’s no denying that the sweetness of lobster meat is the most delicious. This pairs up well with the crispy goodness present in the tendons. No wonder lobsters are more expensive in comparison to shellfish.

Many people believe that lobster and crab taste the same. But that’s not true. Likewise, even lobsters and shrimps don’t taste the same. Lobsters are always chewier and have a spongy texture. All thanks to the high protein content present in them. So they might taste a little bit like shrimps and crabs. But there is a huge difference nonetheless.

Now it goes without saying that the taste depends on how you cook the lobster as well. You can steam, boil, grill, and even fry lobsters. In the case of grilled lobster, the taste is determined by the marinade and seasonings you use. Whatever the recipe, lobsters are always chewier.

When boiled, they taste sweet and salty. When steamed, the taste of the lobster is not like seafood at all. It becomes tender and sweet.

Another ingredient that affects the taste of lobsters is butter. This explains why it ranks as the most delicious thus popular addition to every lobster recipe. What butter does is make the lean meat moist. And enhances the seafood flavor.

Read more: How to Reheat Nachos the Right Way? (Most Useful Tips)

Like I already told you, many people compare the taste of crabs to that of lobsters. Now there’s no denying that both are slightly similar. But that doesn’t mean differences between these two crustaceans do not exist.

To be honest, it depends on what kind of crab you’re talking about. Because the taste of crabs ranges from briny sea to mildly sweet. Sometimes crabs even have a muddy or fishy flavor. As for lobsters, they offer a much cleaner flavor. The most mouthwatering part of a crab is the merus region of the legs.

Lobster meat, on the contrary, is much lighter and sweeter than crabs. At the same time, it’s dense and tender. Unlike crab meat, lobster meat isn’t flaky. And that’s why lobsters are generally more expensive and even tastier than crabs.

You can think of lobsters as a lighter and sweeter version of crabs. Minus the fishy flavor and smell of course.

Difference Between Crayfish and Lobster

Both are crustaceans. So it’s only common to get confused between the two. In fact, the meat in both cases is soft and chewy. They may be close relatives, but there are a few discernible differences between them.

Both have the same amount of limbs for swimming. Along with antennas and a comparatively longer tail. Both crustaceans have 2 powerful claws and an outer shell. Compound eyes are a part of both species. There’s no neck in both cases as well. That means the body of a lobster and crayfish is fused with the head.

Even the abdomen is much the same. That is with multiple segmented stacks. This is where the appendages of the creatures are attached.

Speaking of habitat, it’s easier to differentiate between lobsters and crayfish in this department. Lobsters live in all kinds of oceans and seas. Much like shrimps. As for crayfish, these crustaceans only dwell in freshwater settings. Such as lakes, rivers, and creeks. More specifically, Northern Americas, Australian and European regions, and a few Asian spots.

Crayfish are also called crawfish. Did you know that? Either way, this crustacean is shorter than even average-sized clawed lobsters. Adult crayfish are around 10-15 centimeters long. And lobsters reach the length of additional 5-10 centimeters. That’s about 20 centimeters on average. And when not harvested, lobsters tend to grow much longer.

To sum it up, crayfish and lobsters are the same as far as body structure goes. But these two crustaceans differ in two significant aspects. The first is that lobsters are found in saltwater environments. As opposed to crayfish, that thrive in freshwater.

The second form of difference is the length of the crustaceans. Lobsters are longer than crayfish. At least 5 to 10 centimeters long.

1. The Hardness of the Shell

Maine and Canada are very close to each other, right? Even so, the water temperature differs from one place to another. Comparatively speaking, both the coasts have colder water than the southern and central regions of Atlantic.

But it’s only natural to assume that Northern Canadian water bodies are slightly colder than Maine. And when the water is colder, the shell of the lobster is harder. But there are hard-shelled lobsters in both Maine and Canadian waters.

As lobsters grow, they shed their old shell to grow a brand new one. With seasonal changes, such as a decrease in water temperature, the shell of lobsters hardens for protecting the crustacean from the colder water. In that case, Canadian lobsters have an even thicker shell than their Maine counterparts.

This difference, more often than not, is not noticeable. But it still exists. Because Canadian water is colder than Maine water. So Canadian lobsters grow a thicker, harder shell than the ones dwelling in Maine.

Now let’s talk about how the hardness of the shell affects the taste of the lobster. Thinner shells offer the best, most delicious flavor. Also, they’re easier to get rid of to get to the meat.

Also, Maine lobsters, with their thinner shells, have a much longer season in comparison to Canadian lobsters.

The price of seafood or any other form of meat is directly related to the flavor of the meat. Speaking of which, the flavor of Maine lobsters is not the same as that of Canadian lobsters. Even though both crustaceans come from the same water.

But there’s no denying that Maine lobsters are more delicious. This explains why they’re so coveted and famous. The majority of popular chefs in America use only Maine lobsters.

Maine lobsters are a very important part of Maine’s economy as well as the American culture. The entire country anticipates the season of Maine lobsters. And the only reason for the popularity is the superior taste and flavor of the crustacean.

I mean have you ever heard of people talking about Australian, Canadian, or Californian lobsters? Not like the way seafood lovers praise Main lobsters. That’s for sure! So you have to shell out more bucks.

And that’s the ultimate comparison of Maine Lobster vs Canadian Lobster.

There’s a reason why Maine lobsters are such a crucial part of Maine and American culture and economy. Unlike what Canadian lobsters are to Canada. The former lives in relatively warmer water temperature. This means Maine lobsters have a thinner shell with more flavor.

As for Canadian lobsters, they grow in a slightly colder environment. And that makes their shells thicker and harder. So now you understand why they’re the second choice, hence less expensive?

But if you’re a true seafood lover, then you should go for Maine lobsters. They offer the kind of superior, mouthwatering flavor you’ve just been craving for.

Read more: How to Store Donuts to Keep Them Fresh?