You are here: Home / Pets / Fish and Aquariums / Do Bettas Sleep and How Much Is Too Much? (All You Need To Know) 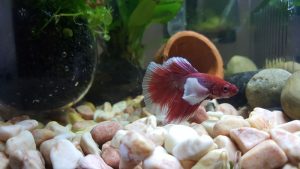 A betta fish lying motionless in the tank can mean that it’s either sleeping or dead. So how do you decide which one is it? You can tell once you know the answer to, do bettas sleep? On the other hand, the fish never sitting still is also a sign related to sleep. So let’s get to know everything about when and how betta sleeps.

Pretty much like humans, even bettas require sleep. But not in the same manner, obviously.

A betta fish is a much lighter sleeper than us humans. Personally speaking, I am a very heavy sleeper. Getting up even during the worst scenarios seems like an impossible task for me. So I should consider myself lucky to not have been born as betta fish. Otherwise, I would have definitely been gulped down during my sleep by a bird or larger fish. 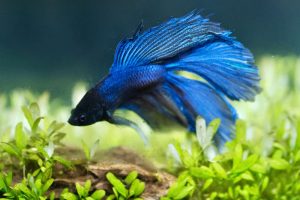 So bettas are light sleepers. They wake up even when the slightest sound or movement is made. That’s how they keep themselves safe from danger or harm.

But you should know that, at this point, even your betta’s ancestors have never had to survive in the ocean wilderness. This means your betta doesn’t know anymore how to run away from a potential predator. Despite that, the fish sleep lightly.

The sleep pattern of bettas is much the same as that of humans. Meaning they’re awake and active in the day and sleep in the night. Talk about being the perfect roommate! However, bettas are even as lazy as us humans. So don’t be surprised if you find them napping in the day.

It’s during these daytime naps that you wonder if your betta is alive or dead. Since the species doesn’t have eyelids! I mean how many living creatures have you come across who sleep with eyes wide open, right! In that case, the next section is relevant. 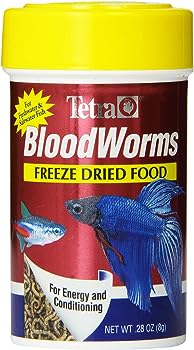 How to Tell If a Betta Fish Is Sleeping?

Sleeping or not; as long as your fish is breathing, you know it’s alive. So try looking closely at the gills and mouth of the betta. Even when sleeping, the little fish draws in water through the mouth and then out through its gills.

However, it’s only common sense to assume that this gill and mouth movement during sleep is slower. In comparison to when the fish is awake. That is completely normal by the way since the body uses less oxygen during sleep. 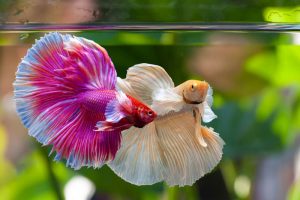 If there’s a color change, you need not worry about that either. Many fish species tend to lose color when snoozing. It’s natural self-defense to avoid being easily spotted. This pale color becomes richer and darker once the betta gets up from its slumber. But if the paleness doesn’t leave even after waking up, it means your fish is unhealthy.

And the last clue is the position of your betta. The most common sleeping positions include open fins, curled up just like cats, and lying down vertically. It may seem odd at first but that’s just how the fish sleep.

Where Do Bettas Sleep?

If you think their sleeping positions are strange, this might sound even weirder. The fish sleep just about anywhere. So don’t be startled to find them sleeping behind the heater or on the filter intake, ornaments, or suction cup.

They even float during sleep. And floating fish do look dead. But more often than not, betta perches itself on random objects for snoozing in the aquarium.

Tips for Making Sure Your Betta Sleeps Well

When your fish is well-rested, only then can you expect it to be active and normal. The same applies to me, you, and everybody else. So you have to ensure you create a good sleeping environment for your little pet.

In the daytime, betta prefers napping in shade. The shade here is brought about by floating or tall plants. Along with aquarium decorations like bridges, tunnels, and caves.

But at night, the fish sleeps the most peacefully and comfortably in complete darkness. This means you should turn off the lights during bedtime. Even during the day, try limiting the number of lights you leave on in and around the tank. 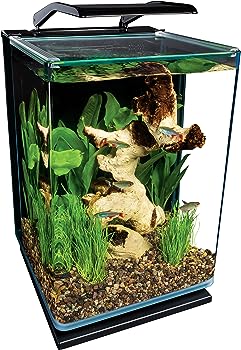 Betta Sleeping Too Much: What Does It Mean?

Not everybody sleeps for the same amount of hours. For instance, I wake up fresh after getting 6-7 hours of sleep. While some people need 8-9 hours to reset their energy levels. So the same rule applies to betta fish. Few thrive on more, and the others on less. This means there’s no one right answer to, how many hours do bettas sleep for?

What you should do is observe your betta sketch out a normal sleeping pattern or cycle. And if your fish starts to sleep more than that normal amount, consider the following possibilities.

Betta Sleeping Too Less: What Does It Mean? 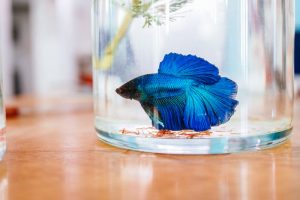 Now that you know the answer to, do bettas sleep, you understand that they snooze with eyes wide open. So first figure out if that’s what’s happening before you jump to the conclusion that your betta isn’t sleeping much or at all. But if that’s what’s actually happening, these might be the 2 possible causes.

So Do Bettas Sleep? Yes, But There’s No Way Of Telling How Much

There’s no correct reply I can provide for the question, how much do bettas sleep? The fish are pretty much like humans. There’s no fixed number of hours.

You just have to make sure they don’t spend the whole day snoozing away. And in order to prevent your betta from napping too much in the daytime, fill the tank with fun stuff.

Check-in on your tiny pet now and then just to make sure everything is in place.

Do You Want to Know More Tips and Trick on TopTipsForHer?